The Malden Golf Club had their original course near to Raynes Park Station and were founded in 1893, incorporated as a Limited Company in 1924. The Club moved to New Malden in early 1926 when the lease on the Raynes Park land had run out. It was being acquired for construction work, and wasn’t ideal for a course because it became “merely a swamp in parts after heavy rain”.

The new site at New Malden was chosen due to its sandy sub-soil which meant it would hopefully stay dry in winter. It was taken with a 21 year lease. The new course was designed by Harold Bailey FRIBA and Guilford Dudley. Plans were received in 1925, with greens and fairways being seeded before end of April 1925, and trees, broom, heather all planted in the autumn of that year. Construction of the Clubhouse began in May 1925, officially completed on 15th February 1926 according to planning records. Around 50 workmen had been involved in the construction of the new facilities.

The course was opened finally on 1st May 1926 by Col. Sir Augustus FitzGeorge, President of the Club and descendant of the 2nd Duke of Cambridge, owner of the Coombe Estate (explaining the origin of local road and institutional names). It covered 115 acres and was 6250 yards long, comprising of two loops both with 9 holes, starting at the clubhouse. 8 holes were 400 yards or longer, 4 were short holes. Both the Coombe and Beverley Brooks had to be negotiated with driving shots.

The Clubhouse was “Georgian in character”, “constructed with every consideration for the comfort of the members” which included the installation of central heating, what a luxury! The ground floor had a main hall, card and writing rooms, refreshments lounge, dressing room with shower, bath and lavatory, drying room for clothes. The first floor had a large dining hall accessed via a fine oak staircase, a kitchen, pantry, the steward’s quarters, ladies dressing room and ladies lounge.

Membership swelled to 389 in the first year at their new home.

The club grounds were used for agricultural production during the Second World War and the clubhouse was a base for the local Home Guard. 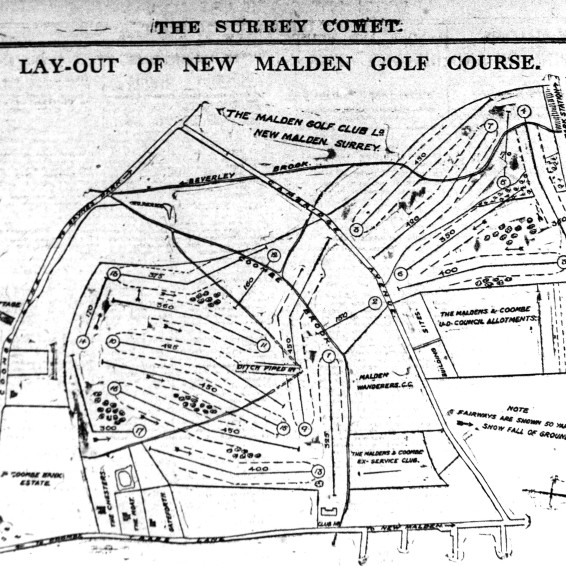 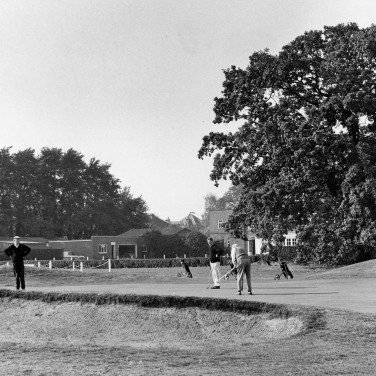 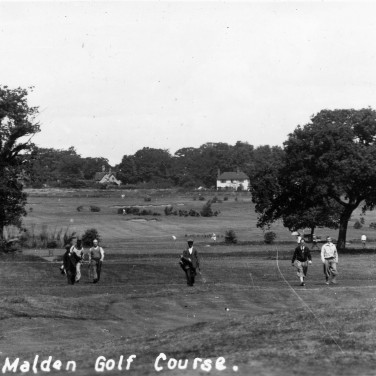 Malden had 3 18-hole golf courses with the completion for the new course: Coombe Hill, Coombe Wood and New Malden Golf Club.  Really indicative of the popularity of the game at that time.

In the Maldens and Coombe Urban District Council Act 1933, the council sought to acquire and manage the ‘Coombe Lands’, 187 acres occupied by 300 separate owners and including both the Coombe Hill and Coombe Wood golf courses. This would allow council rights to private roads allowing for repairs, consistent provision of sewers and drains, and the ability to charge improvement rates to local occupiers from 28th July 1933. It cost the UDC £72,000. National government leant the money, to be paid back through general rates: at the time is was deemed  “unlikely that a Bill of this kind will ever come before us again”.

The Golf Courses would come under municipal management, charging admission. The idea of the Act was that these areas would be protected as open space for all time, for which surrounding properties would pay a fee for 21 years, according to proximity to the courses. The open spaces were deemed as a valuable asset, enhancing property prices of the local area – still true to this day.

According to my 213 friend Roger, Langley Grove was a secret hide out for Russian spies. No more information on when or what they were doing there (hope I haven’t blown anyone’s cover!?) so if you have more on this story, I’d love to know!

I like thinking and making, I also like listening to other people's conversations on buses. I have a love hate relationship with cardboard. Non-smoker, enjoy a drink now and then, need to get fitter, happier and more productive. View all posts by AmyG