The area of Norbiton/New Malden now occupied by Kenley Road and Clarence Avenue was once land forming Dickerage Farm, the farm buildings being located towards the north end of present-day Dickerage Lane.

The Triangle was constructed in the mid-1930s to provide local shops and amenities for the new Coombe Berg estate of Clarence Avenue and surrounding roads. It is first listed in the Kelly’s street directory of 1938. Original shops on both sides included: Job dairymen at No.1, Bettawear Drapers at No.4, Triangle Wine Store at No.7, The Triangle Household Store hardware merchants at No.9 and Coombe Fisheries at No.12. There was also a newsagent, butcher and baker.

The planning record for No.12 shows that a shop and flat were completed on 19th March 1936. Later records show a covered way and a fish curing chamber/smoke house added when the property was taken on by the fisheries business. It later became a general grocery store.

Completed in December 1955 at No.15 The Triangle, permission for The Brewster was granted in 1951 to Courage Breweries. Renamed the Hungry Horse in the 1990s then The Brewster again, it became the Willow Tree in 2002 and a Korean restaurant in 2005. A small alleyway called Brewster Place links Arundel Road and Dickerage Road behind the pub building. 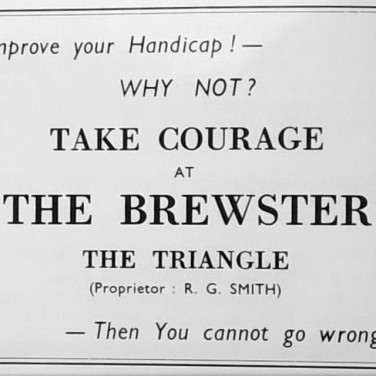 I like thinking and making, I also like listening to other people's conversations on buses. I have a love hate relationship with cardboard. Non-smoker, enjoy a drink now and then, need to get fitter, happier and more productive. View all posts by AmyG